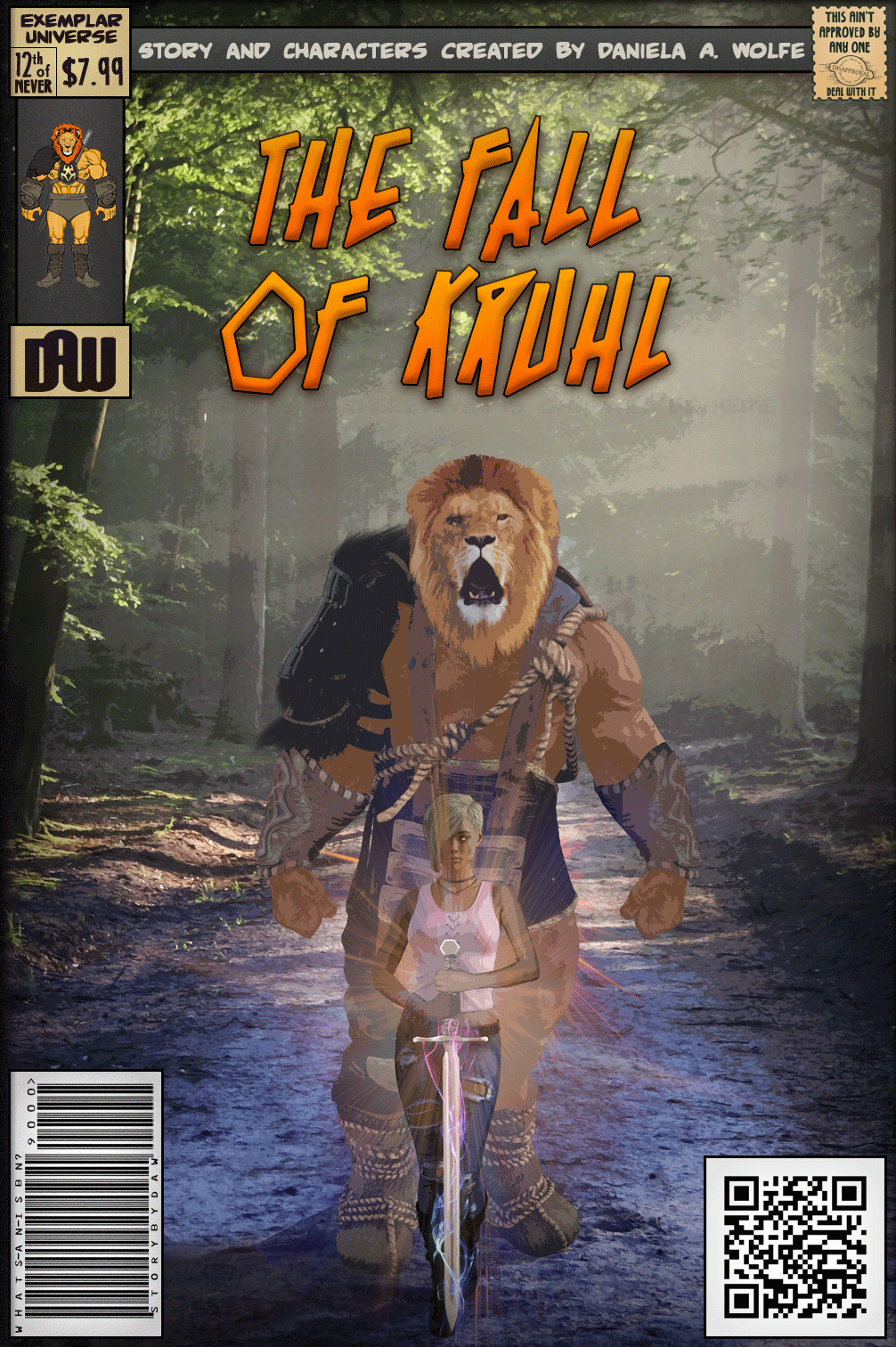 This story is the second one in my Exemplar Universe. It takes place just after the prologue of Psyren’s Redemption. It’s not, strictly speaking, necessary to read the previous story to enjoy the Fall of Kruhl, but it will give you a better grasp of the story and will avoid spoiling the first story

Serena yawned, pressing her foot to the brake as she approached the intersection. She glanced at the clock and sighed. It was a few minutes after four in the morning and she’d just gotten off another late shift at the hospital.

“I’m getting too old for this shit,” she said covering her mouth with her fist and emitted another loud yawn.

The light shifted to green, and she accelerated across the roadway, turning the corner three blocks away. She caught movement out of the corner of her eye and slowed to peer back over her shoulder. She wasn’t certain what had prompted her to even look. Though still dark and most of the town had yet to awaken, the street was not empty. There were those, like Serena, who were still getting off late night shifts and returning home, and the early risers. Not to mention the vagrants, drug-addicts and criminals. She’d seen a few of those over the years as a nurse at Alameda General.

A figure staggered around in the distance, its movements were erratic and as she watched it move toward her, she stomped her foot on the brake pedal, transfixed. It was probably another druggie; they weren’t exactly in short supply in Tondzaosha. Yet… something was not right. As the figure drew nearer, a nearby streetlight illuminated its lithe form. Serena’s breath caught in her throat.

She rolled her window down, and put the car into reverse, stopping when she was closer to the figure. “This-this is wrong… sorceress. You did this… you, you change me!” A feminine voice screamed, before Serena had even laid eyes on its owner.

The girl staggered into sight, her bare chest heaving as she struggled forward. Blood streak down the side of her head and chest. She panted and wheezed her naked body glistening with sweat. She dragged something behind her that gleamed in the moonlight, and the scrape of metal on concrete trailed her. Her feet raw and bloodied, she left a trail of red footprints as she moved.

As Serena studied the girl’s figure, she realized that her first assessment had been wrong. It was no girl, but a woman. Her height had thrown her off, though the girl was short, she had the curves of an adult woman. If she were to guess she’d say she was nineteen or twenty.

“Reesha… send me back… I’m the, I’m the King… it’s WRONG!” She screamed out the last word at the top of her lungs. She blinked and looked around, and for a moment her eyes focused and a degree of lucidity returned to her countenance. Before she’d uttered a single word, she descended back into delirium.

“Lost… Yes, they’ll be, they’ll be– lost without me… Do-don’t you see?” She asked and glanced down at the object she’d been dragging. “Waldy, waldy, Waldere… I’ll use its power. Find a way…”

She laughed, stopping with no prompting and teetered on her feet. She fell to one knee. Weakened by blood-loss, she no longer possessed the strength to stay standing. That might have been the end of her, but a dull thud sounded in the near distance and the girl gazed up in time to witness a figure come rushing toward her.

Her head jerked back, and she wobbled around holding her arms out to provide stability, but her efforts only resulted in her falling face first into the pavement.

“I’ll die here.” The words seemed to come from nowhere and she was so forgone that she didn’t realize it had been her who’d spoken them.

Serena called out, but it didn’t even phase her. She shivered, clutching at her bare chest as the last of her strength drained from her. She closed her eyes and a nice numbness swept through her body.

Serena dove to her knees, scraping them against the pavement and grunting as her hands clasps the girl’s ghost-white cheeks.

“Honey, are you okay?” Serena asked slapping her cheek with a light flick of her wrist. The girl’s eyes flew back open. She squinted, straining her eyes, but all she made out was a blur.

“Did someone attack you?!” Serena asked. When the girl opened her mouth to issue a response, her lips moved, but no sound came.

The girl sensed movement and her rescuer’s face was lit up by an odd rectangular glowing box. She lifted it to her mouth and began to speak into it.

She grabbed Serena’s shirt, fighting to find the words, trying to make her understand. Serena had her first good look into the girl’s eyes, and she gasped taken aback by what she saw. Her eyes were gold, and the pupils were two vertical slits, like cat eyes. “Waldere… keep it safe… the sword is…”

She trailed off; her eyelids heavy. The girl closed her eyes, prepared to let the darkness take her away, but the woman spoke. “I need you to stay awake, okay?”

“Keep it… keep it safe,” the girl managed before darkness closed in and Serena sat there, breathless.

“Hello?!” The emergency operator spoke in Serena’s ear. She jumped, fumbling with her phone, nearly dropping it, but finally secured her grip.

She cleared her throat. “Uh, yeah, I have a young girl here, she’s probably in her late teens or early twenties, she’s bleeding from a gash in her side and across the side of her scalp…”

Serena gave as much information as she could and went rushing for her car which was still running and popped the trunk. Retrieving the first aid kit from within, she rushed back to the girl dropping the small duffle at her feet. As a nurse, Serena knew full well the kind of injuries people could incur, and she had put her kit together accordingly. Her youngest had told her on more than one occasion that she had once again taken things to an extreme. If only he could see her now, she thought a dry smile touching her lips for a moment before she returned her attention to her patient.

Outside of the hospital, she could do very little, but she could try to stop the girl from bleeding out and hopefully keep her alive long enough for the paramedics to arrive.

She sank her teeth into her lower lip and retrieved the items she’d need from within the duffle, speaking to the operator as she worked. Serena didn’t see the ambulance until it was almost on top of them so lost was she in her work. A moment later a police squad car pulled up behind it and soon, the paramedics came rushing out of their vehicle. She stepped back allowing them to take over, but also provided them with the information they’d need to treat her.

They paid no mind to the sword laying a few feet away, concentrating on treating their patient. Serena stared at it, transfixed by the ambulance’s lights reflecting off its polished steel surface. There was something strange about that weapon. It seemed almost…

She caught movement out of the corner of her eye and spun around to face it. A figure donned in an all-black cloak and hood lingered in the distance, just close enough she could make out its shape, but little more.

“Serena?!” A voice demanded from within the gloom behind her.

Broken from her spell, she whirled about to face the speaker. A slender man in his late twenties who was coming closer. She glanced back where the cloaked figure had been standing, but it had faded into the night, if it had ever been there at all. She stared after it for a moment, her heart hammering in her chest. Unsure whether what she had witnessed had really happened.

The newcomer cleared his throat, and she turned to regard him as he approached. She narrowed her eyes and noted his pinched face and narrow frame. It had been a few months since she’d last seen him, but she knew him on sight.

“Good lord, you scared the hell out of me,” she rounded on Tom Shanderly her hands on her hips. She made no mention of the figure in the distance, convinced now that her mind had been playing tricks on her.

The young deputy was as thin as a rail, but tall. Most times an easy smile marked his face, but on this night his features were gaunt and layered in shadows granting him an almost otherworldly appearance. Tondzaosha wasn’t what you would call a large town, and their police force only consisted of a dozen officers, the sheriff among them.

“Sorry, didn’t mean to give you a fright,” he said. He held a flashlight in his right hand, but kept it pointed at the ground. A smile stretched across his face, but it did little to brighten his countenance.

“Tom,” she said motioning him over and directed his attention to the ground where the sword rested. “What do you think of this?”

He moved over, eying the weapon and turned back to her his brows furrowed. “The hell?”

He knelt down reaching out to touch it, but snatched his hand away after only a second of skin contact. The sword flashed a brilliant bright white forcing Serena to avert her eyes. Tom screamed, howling as if he’d just been shot. His eyes bulging out of his head, he clutched at his hand and stared at it for several long moments. He took a deep breath and turned to regard Serena a wild, almost panicked look in his eyes.

“Jesus,” he said taking several steps back. “It felt like my hand was on fire.”

Serena glanced at the girl who was, by then, being wheeled into the ambulance on a stretcher. She hadn’t been very coherent, but whoever she was, Serena had the feeling her feverish ramblings were important. Why did that thought fill her with such dread?