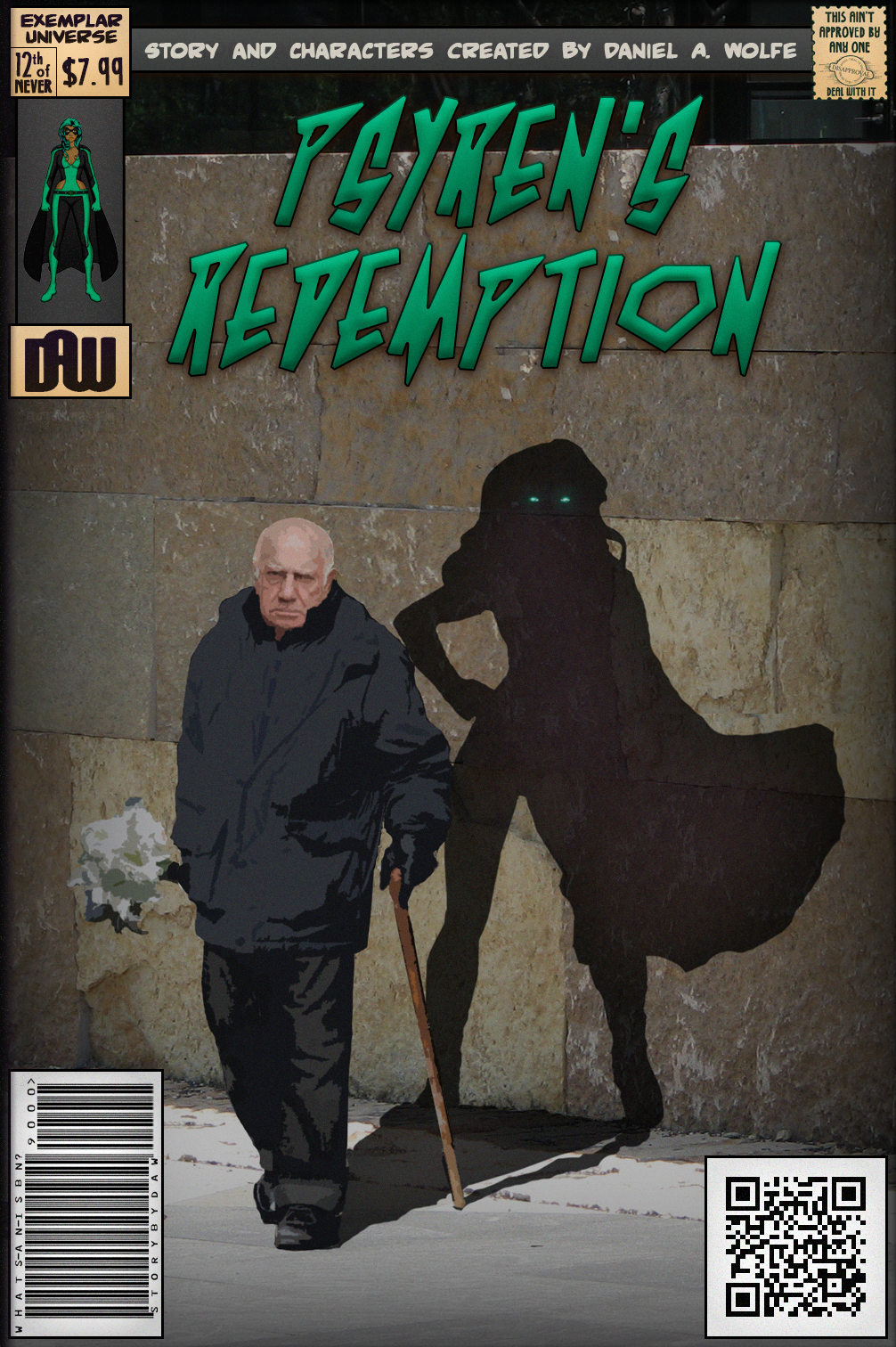 She grunted as she climbed to her feet and returned her gaze to her superior. “I-I’m not really sure. There was a strong enough imprint on the old man’s clothes I was able to get a fairly clear viewing, but…”

She trailed off, pulling her hair away from her face, and bit her lip as her hands brushed against something damp… blood trickling from her ears.

She let her hair fall back into place and glanced over her shoulder at the sculpture of the woman. “I’ve never experienced anything like it. There was a man in a lab coat, one of ours, a woman who looked remarkably like that sculpture, and something big lurking in the shadows. I caught movement in the background. It might have been the old man.”

“The man in the AEGIS lab coat seemed to have some sort of telekinetic abilities. He was sending out waves of destruction with his hands. He saw me, sir.”

“Saw you, how?” He asked raising a hand to his temple. The ribbon of darkness that surrounded them, swirled and accelerated in a dizzying spin before dissolving into the calm night air.

“I-I don’t know, sir. Nothing like this has ever happened before. I’ve never been able to interact with the subjects of the vision until now. I think we’re dealing with a powerful exemplar. Maybe a precog of some sort.”

Matthews nodded and turned back to the corpse and old man’s unconscious form. “I checked him for ID, looks like our friend here is one Everett Howard. An ambulance should be on scene any moment now. We’ll need keep an eye on him until I can get a guard rotation set up with the local PD.”

“Is that really necessary, sir?” Amelia shuddered and slipped her hands inside her coat pockets.

“We’re not operating with a lot of information, agent. This man is only survivor and our best chance at finding out what the hell happened here. If we’re dealing with the perp I think we are, this person or persons don’t often leave survivors. This man’s life could be in terrible danger.” He said climbing to his feet and turning to cast his eyes around the crime scene.

“It’s damn near time you found out, anyway. For some time now AEGIS has been aware of a number of events associated with the name Chemosh. We don’t know if this is one person or a collection of individuals, but this incident coupled with the one at our research facility earlier in the night fits the established MO.”

Chemosh? Amelia blinked why did that name sound so familiar?

“Sir, if there was an attack at one of our facilities why wasn’t I told? I may not have been able to get a good read on this particular attack, but—”

“Agent,” he said bring a hand up and rested it on her shoulder. “The existence of the facility is on a need-to-know basis and until this moment there was no reason for you to know be aware of its existence. Besides, I won’t risk one of my best agents when it’s abundantly clear that your retro-cognizance isn’t going to be of use when dealing with this threat. If you try to view again, there’s no telling what might happen.”

“Sir, I’m willing to take the risk sir if there’s even a chance I can get to the bottom of this.”

He looked her in the eyes and shook his head. “I’m not sure I am, agent. We’ll have a doctor look you over and if I’m satisfied there is no risk to your health, then I will consider it. Until then, you will follow my orders. Is that clear, agent?”

“Crystal clear, sir. What about the old man? Do you think he’s just a bystander or is he involved in this… shit fest?”

“My gut tells me he’s just an innocent, but it never hurts to be cautious. I’ve got some of our boys back at the field office running a background check now.”

“And if we need to contain him, sir?”

Matthew spun around and met her gaze before shaking his head and turning away again. “Let’s hope it doesn’t come to that. Our medical facilities adjoined the lab that was attacked and are in disarray. Best-case scenario, they won’t be available for several weeks. I’m having him taken to the County General. If it comes to it, I’ll contain the whole damn hospital. He just needs to be kept safe and, if necessary, in line until this mess is puzzled out.”

Matthews moved away, to talk with the officers on scene and Amelia shivered against a new onslaught of wind. She folded her arms across her chest and bit her lip, feeling her teeth chatter as she waited for her superior to finish up. She grimaced and looked down at her dress and wished she’d chosen something a little warmer.  She’d wanted to look good for her date and hadn’t been expecting to spend much time in the cold.

It would be one damn long night. She slipped her hand inside her coat and reached for her holster to ensure that the button was unclasped to allow for a quick draw. She may have been safe at the moment, but she couldn’t shake the feeling that things might take a sour turn in the blink of an eye and she intended to be ready if they did.

As Matthews returned, she zipped her coat back up and turned to meet him. He approached, giving no sign of discomfort even as a torrent of wind blasted through the street strong enough to threatened Amelia’s modesty. He continued on, giving no outward sign he noticed.

“I want you to ride with Mr. Howard. The sooner the doctor’s have a look at you and make sure there were no ill effects from this incident, the better.” he said his eyes trained on something behind Amelia’s shoulder.

She turned to follow his gaze, just in time to witness the ambulance pull up to the edge of the crime scene. She glanced back at Matthews ready to protest, but stopped short when she looked into his eyes. There wasn’t any doubt in her mind, that his statement had been an order, not a request. She nodded, bit her lip and moved toward the pair of rescue workers as they arrived on scene. From there the night descended into tedium and as the paramedics did their work, first with the old man then herself. Amelia sighed and let them at it. She’d been right in at least one respect, it was turning out to be a long night.

Battle For Earth: The General (an interlude)