Battle For Earth: The General (an interlude) 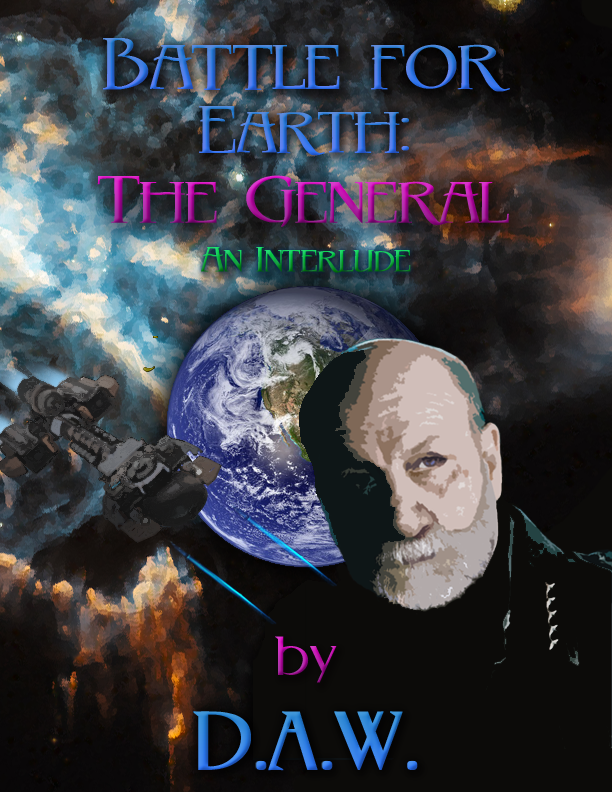 On a distant world a aging general receives news of the resistance
and is forced to make some hard decisions.

Tedious, that’s the word that sprang to mind as the general read over the week’s readiness reports. He had never cared for the monotony of paperwork, but unfortunately such things came with the job. He still felt inadequate to the task, but after the unexpected death of his predecessor, the then colonel, had been the next logical choice for the job. So he read those reports attentively, if not enthusiastically, combing through them try to determine if anything more could be done to prepare for the upcoming invasion.

There came a knock at the door, and the General eager for a moment’s distraction set his tablet down and called for whoever was on the other side to come in.

‘No’, the general corrected it wasn’t Corporal Jake, this was Corporal Jared. Though they were identical in every way, and had been flashed with the same memories, the two clones had very different personalities. Jared was quick to please and almost seemed to enjoy being ordered about. Jake performed his duties admirably, but the general got the sense the young clone would rather be doing almost anything else than soldiering.

“At ease, Corporal.” He rubbed his eyes and fought down the sudden urge to yawn. “I presume you have a reason for intruding on me at this late hour.”

“Yes, sir! We were told to notify you immediately if we received any transmissions from Earth.” The corporal grinned his entire body shaking from the excitement.

“Can I assume then that we received such a communication?” the general asked pushing himself up out of his seat.

“Yes sir! We received word from a small group of resistance fighters!”

“Amazing! They actually managed to continue resisting the Qharr for this long!” The general exclaimed moving around his desk and eyed the young clone a smile touching the corner of his lips.

The corporal stiffened, but didn’t say a word as the general eyed him. “Tell me, Corporal, the biometric key they used to activate the communications array who’s genetic imprint did it show?”

The young soldier grinned. “Yours sir!”

“I take it that he still alive, then?” General Harold Briggs asked pacing back in forth in front of the soldier.

“No sir! The array was activated by a woman by the name of Becca Briggs.”

“My niece.” Harold felt tears well up in the corner of his eyes and turned away so that the young soldier would not witness his sudden loss of control. She was still alive! He could hardly believe it. His heart ached for her as he imagined the sort of things the conquerors must have put her through. He could only guess, but the Qharr were prone to taking the inhabitants of the worlds they conquered as slaves. In all likelihood she’d probably lived a life of servitude.

“My twin brother’s child,” Harold replied absently before he turned to sharply eye the young clone. “Tell me about these resistance fighters.”

“I don’t know much sir. The Lieutenant had to cut the communication short, but the entire transcript is there in the file and the video file is available for download on the central server. There was one thing sir. The leader, she called herself Alexana Briggs. I thought you might be interested.”

Alexana? Hadn’t that been Muriel’s middle name? Harold stroked his chin then turned back to the corporal.

“You said they were a small group of resistance fighters, exactly how small?”

“Six… or I guess seven, sir! They indicated that the recently suffered a devastating blow at the hands of the Qharr!” The corporal twitched nervously.

‘Seven? Good Lord that won’t be enough!’ Harold thought gritting his teeth as he felt the weight of all those years of planning come crashing down around his shoulders.

“…but one of them claimed to be a member of another faction calling themselves the Nester Alliance,” the corporal added. “He indicated that he had a trained forced of close to two hundred men and could possibly muster up as many as two thousand with enough time and proper training.”

“Two hundred?” The General shook his head and scratched at his beard. He wasn’t quite sure what to think of this new development. He knew of the nesters, of course, but the plan had been for them to take part in the rebellion against the Qharr. If the resistance had fallen, how had the nesters managed to survive? There were so many questions and so few answers. Could he really afford to give them enough time to build their forces? “Leave the report on my desk, Corporal.”

Then he had the solution there dangling in front of him, and it was so simple he almost laughed. ‘Damned if it still won’t be enough,’ Harold thought shaking his head.

“What are we going to do sir?” The Corporal swallowed hard.

The Corporal had spoken out of turn, but rather than dress him down, he turned away again and let out a long sigh.

“What is the current status of Project Rhiannon?”

“Last I heard, sir, the device is functional, but still a bit unstable. Doctor Kepler was working at increasing the range among other enhancements,” he replied.

“Well then Corporal listen carefully. It will be up to you to relay my orders. This is what we are going to do…”

As my other stories this is a work of fiction and as such any resemblance to real life individuals, events or locations is purely unintentional. Other than this site, only Fictionmania, Bigcloset Topshelf, & tgstorytime.com have permission to host this story and my previous works unless I state otherwise.