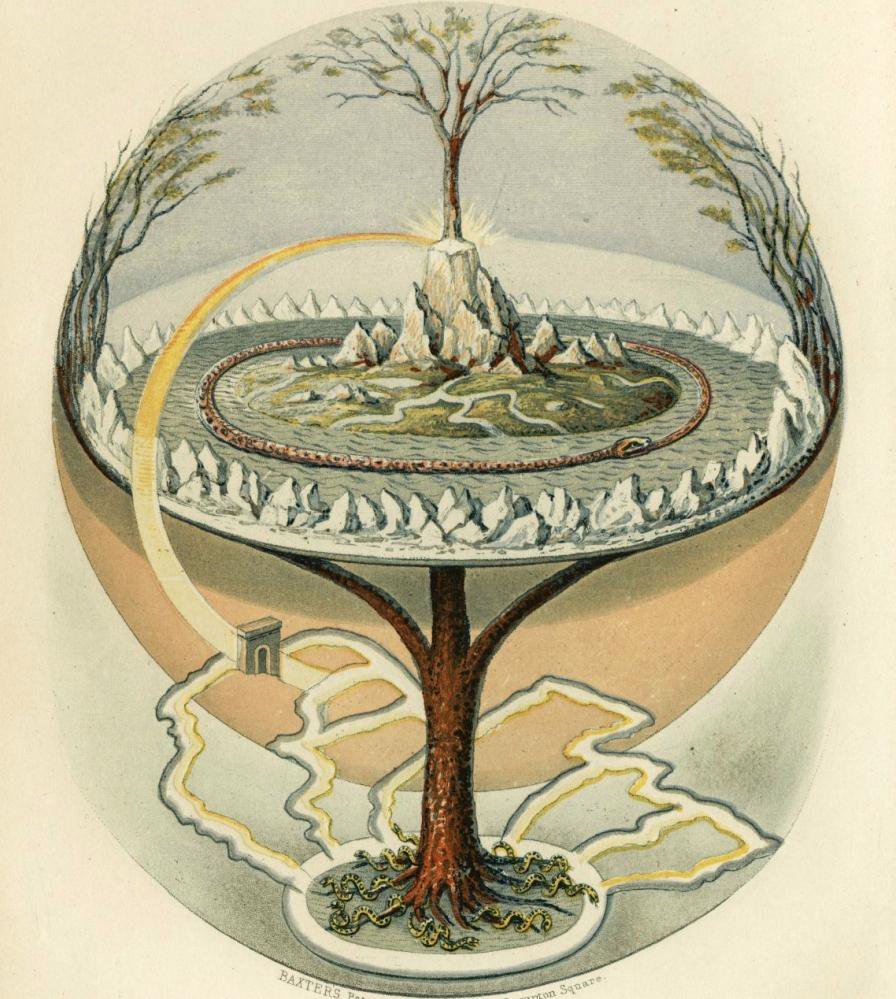 A mythos piece describing the mythology behind the Spellbinder Universe and by extension the Ragnarok Rising Trilogy.

In the beginning there was only the vast emptiness of Ginnungagap. From out of its great gaping abyss formed Niflheim, a place of everlasting frost and cold. Soon thereafter rose up the primeval world of fire and insatiable heat, which is so named Muspellsheim. It came to pass that the frost from the world of Niflheim met with the heat from Muspellsheim and from that collision Ymir the giant was born. And Ymir fell into a great slumber as he journeyed near Muspellsheim. Now it came to pass that he began to perspire and from under each arm was born a daughter and son. And from them all giants sprang.

Now it just so happened from were Ymir had sprung, so too did Audumla, the great primal bovine. Ymir fed from her teats and was nourished. And Audumla hungered so she licked upon the ice of Niflheim and its salt sustained her. The heat from her tongue caused the ice to melt and from it emerged Buri.

Buri begat a son who he named Bor. And Bor took a fancy to Bestla a giant, and he wed her. From their union, Odin the Allfather and his brothers Lodur and Hoenir were born.

It came to pass that Ymir and the sons of Bor warred one with another and the brothers slew Ymir. And so much blood flowed from Ymir’s veins that Ginnungagap filled and all the giants save Beregelmir and his wife did drown. Odin, Lodur and Hoenir, raised up Ymir’s body from the great sea of blood and with it they formed Midgard. From his flesh, they formed the land, from his bones the mountains, and from his hair they created the trees and all plants and they poured blood of Ymir upon Midgard and formed the oceans, rivers and seas.

And they trapped the fires from Muspellsheim and with it they formed the stars, moon and the sun. Other gods appeared from out of the abyss and the brothers knew not from whence they came. And the gods called themselves the Aesir. From among them Odin took him a wife, who was named Frigg, and together they begat many sons and daughters. As one, the Aesir created Asgard, their home, which they placed in the heavens far above Midgard so that they might watch over it from afar.

And Odin looked upon Midgard, and found it lacking, but knew not what was lacking. So he took his wife and two brothers to Midgard and as they traveled upon the surface of the land they eventually came upon two dead trees. Now these trees were twisted and knotted and were most unsightly, but within them Frigg saw what her husband had been seeking. And she took the first tree and she gave it a form which mirrored her husband’s, that of a man. Then she took the second tree and formed it into the shape of a woman after her own form, the shape of a woman.

Now it came to pass that the bodies which Frigg had formed were without life, so Odin gave them spirit. Now those first humans were without reason, like unto a beast, so Lodur gave them wit so that they might have understanding. Now, Hoenir saw that they could not perceive the world around them, so he granted them sight, hearing, touch, taste and smell. And the man they named Ask after the ash tree, and the woman they named Embla after the elm tree.

And out of the abyss three more goddesses appeared and they called themselves the Norns, and they watched over the fates of men, women, gods and goddesses alike. Urd was the first to awaken and it was given unto her to watch the past, Verdani was second and the present was her domain, Skuld was the final and she sees that which has yet to come to pass. And the three goddesses of fate created Yggdrasil, the world tree. Now the roots of Yggdrasil came to connect all the worlds from Muspellsheim, Niflheim, Midgard, Nidarvellir, Svartalfheim, Alfheim, Asgard, Vanaheim, Jotunheim and many more beyond number. And the tree sprang up into the heavens and issued up the spring of Urd. There the Norns now reside so that they might water the roots of the world tree.

Now Jotunheim is the home of Beregelmir and all those that have sprung from his loins and they call themselves the Jotun and they are enemies of the gods. Alfheim, is the home of the Lejosá¡lfar who are friends to man. Nidarvellir, is home of the ever crafty dvergar. It is said that Svartá¡lfheim is home to the most vile svartá¡lfar, which we now know as the Dokká¡lfar. And finally from Vanaheim sprang forth gods named the Vanir that did rival the Aesir in power.

Now it did so happened that a god named Loki–who delighted in causing much mischief among both gods and men–lay with a Angrboda, a Jotun. From their union was born Fenrir the wolf, Jormungand the serpent, and Hel who had death in her heart. When Odin saw this he took Já¶rmungand and he did throw him into the depths of the ocean, and Já¶rmungand grew so large that he came to encircle the world. Frigg foresaw that Fenrir would wreak havoc upon the world, so Odin took him and cast the beast in chains. And Odin seeing death within Hel’s heart gave her dominion over the dead, and she took up residency within Niflheim and her domain within came to be known as Helheim or simply Hel. And she set her faithful hound, Garmr, at the gates of her abode to keep the dead within and the living without.

It came to pass that the Aesir and Vanir warred with one another over the hearts of men. They fought long and hard, and slowly their numbers dwindled until only the goddesses remained. Yea, even the Allfather, Odin did fall. It came to pass that those that remained did make peace and together they watch over Midgard and await the coming of Ragnarok and the final battle.

As my other stories this is a work of fiction and as such any resemblance to real life individuals, events or locations is purely unintentional. Only Fictionmania, Bigcloset Topshelf, & tgstorytime.com have permission to host this story and my previous works unless I state otherwise.